Joey, a 13.2 hh welsh cross, was just one of those ponies that had done it all. He used to drive, switched to western, did barrel racing and other timed western events, and recently started working on dressage and eventing. Originally Joey’s dressage trainer was going to ride him at the Horse Trials, but later decided she wouldn’t be able to. Thus the responsibility fell to Katharine.

Katharine and Joey had a mere 3 weeks to get acquainted before the show.  At first, this task was daunting, but Joey is such a pleasant little guy that he and Katharine were friends in no time at all.
This was Joey’s first ever recognized event. His dressage test was a little tense, but that was to be expected. His test was geometrically well done, and left him with a score of 41.3 with the pair in 13th place.

Stadium was next the following morning, and after taking a very hard look at the first jump, Joey cleared the rest with flying colors. (At times, Joey seems to have believed each jump to be three times larger!) They maintained their dressage score and moved up to 10th place. 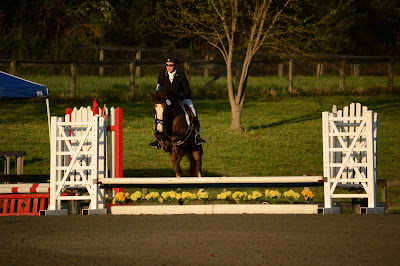 Cross country was the final portion of the competition. Joey warmed up like an old champ, and went out on the course with confidence to spare! They jumped clean around the whole course and finished well within the time allowed. This let them finish on their dressage score and end up in 7th place! Not bad for an ex-barrel pony! 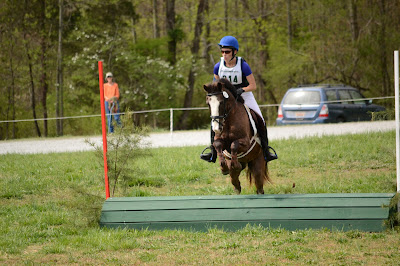 Tristan is Katharine’s first horse, one she dreamed about having since she was six years old. He used to be just a backyard horse that went on trail rides, but once he and Katharine started working together, the sky was the limit! Tristan has been with Katharine for almost 6 years and in that time they have been to college (finishing with a bachelor’s degree in Equine Entrepreneurship none the less), traveled across the country multiple times, and trained with many nationally renowned riders!  However, even with many years of experience under their belts, most of the time when they would show, things always seemed to go wrong.

This was not one of those shows.

After a (mostly) wonderful dressage test save for some minor disagreements about the right lead canter, Katharine and Tristan were leading their Training division with a score of 31.4! The pressure was certainly on for cross country later in the day!

Cross country warm up came around, and Tristan could not put a foot wrong. Katharine had some concerns about a couple of the obstacles on the course (a hidden ditch and scary looking drop), but once the pair was galloping across the field, her fears were wiped away! Tristan took each and every fence in stride, and cleared the most difficult jumps on the course without a single issue! Katharine had tears of joy streaming down her face after realizing they had just ridden their career first double clear cross country round at the Training level! They maintained their lead on the competition. 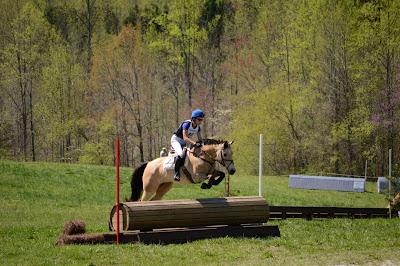 The pressure truly mounted as stadium came around. With only 1.3 points separating 1st and 2nd place, there was absolutely no room for error. The first six jumps went beautifully, but as they came into the triple jump complex at #7, they hit a funky stride right before the first jump. This could have spelled disaster. Katharine just closed her leg between the first and second jump, and even though Tristan rapped the B fence pretty hard, it stayed in the cups. Over the 10th and final fence, Katharine finally managed a big smile over the jump. Realizing they had just won a Training level competition for the first time, Katharine truly started crying tears of joy! A wonderful start for 2013 competitions!

Posted by Unknown at 2:07 PM No comments: